Distract Yourself From Debilitating Grief With a Ridiculous DIY Wall Hanging!

So it’s been a pretty garbage year here at Best Friends Pizza Club. I never really understood what people meant when they talked about “keeping busy”–normal life tasks are enough of an imposition on my Netflix-and-lying-around hobby–but this year I learned that there’s some value in keeping your hands busy even if what you’re doing with them is ultimately pointless. I accidentally cut way back on drinking at the same time as some really sad personal shit went down, and it turns out that the combination of sobriety + grief + free time results in a completely intolerable mental state for me. So I started crafting. I knit a bunch of socks even though I never wear socks. I crocheted cozies for my jars of face cream. I built a really ugly table.I painted my entire apartment. And I made this gigantic monstrosity of a wall hanging, over three very long, very emotional days.

If you’re looking to distract yourself from your feelings, this is basically the perfect project. It’s mindless enough that you can keep up with West Wing episodes, and it’s just the right amount of finicky that your brain will get stuck on “annoyed” instead of “endless sobbing.”

Start by making a ton of tassels. Cut a piece of cardboard that’s like 2.25x the length you want your finished tassels to be and use that as a template. Wrap your yarn around the cardboard 20-30 times, then gently slide the yarn off the cardboard and tie a new piece of yarn in a double knot around the center. Snip the loops open, then fold the tassel in half and secure it with a new piece of yarn wrapped around the top a few times then tied off with another double knot. You’ll use the two very top strings to attach the tassel to the latch hook canvas. 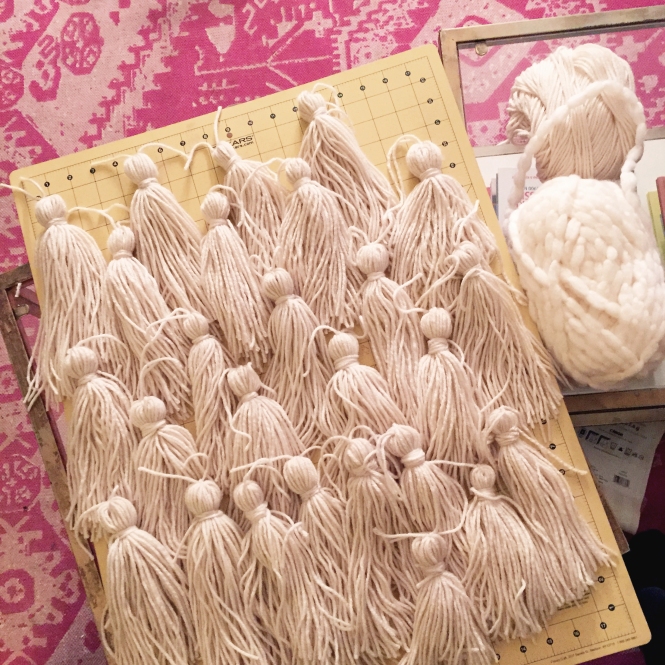 Then start on the “weaving” part. Of course you’re not actually going to weave this, because you don’t know how to weave and now is not the time to learn a new skill. You’re just going to use a crochet hook to pull loops of the puffy yarn though the holes in your canvas.

Go through every second or third hole and figure out what you think looks best. If you’re making a big piece, learn from my mistake and start in the center. I didn’t really plan out my design, but I guess this would be a good place to if you decide to go that way. Just draw it on with a yellow marker or something.

To attach the tassels to the canvas, just tie them on with the top piece of yarn. I put them on in roughly staggered rows, and figured out a balance between how full I wanted them to look vs. how insane I was going making them. Don’t worry about being super precise because you can go in at the end and fill in any bare spots.

Are you going crazy yet? Cool. This picture was taken at 4 am.

Since the yarn is just poked through and only secured by friction, you’re going to want to be pretty careful when you handle it in the beginning. Once you have a decent amount filled in, flip it over and spray a generous coating of aerosol adhesive on the yarn loops. This will stop things from coming loose when you’re wrestling with it later. 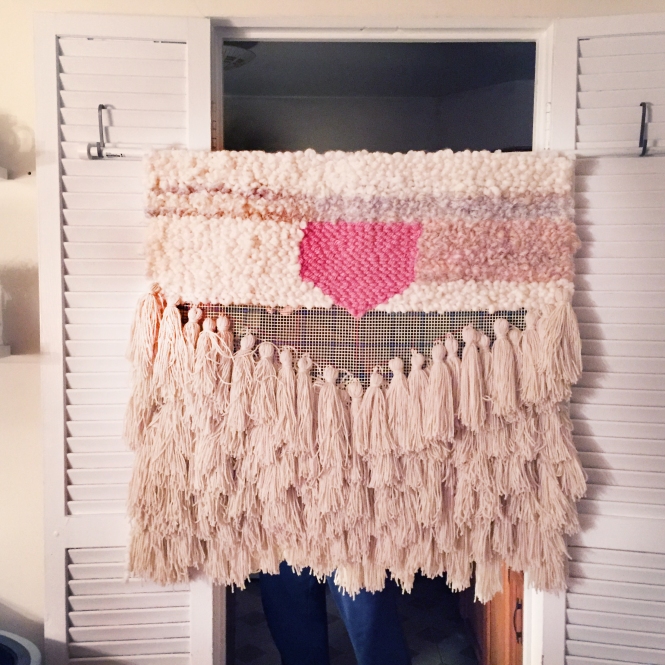 Towards the end I hung it up in a doorway and my boyfriend helped me tie the tassels on from the back. I also did some fun contortions to poke the yarn through in the middle because I started from the outside edges like a jerk.

If you feel like giving up at this point, that’s fine. Crafting is supposed to distract you from your problems, not become one of them. If you realize that you still need to make 20 more tassels and you’ve run out of yarn and you cannot bear the thought of making another trip to Michael’s, you know what? You are the boss of your life and you go ahead throw your wall hanging in the garbage if you feel like that’s what you need to do right now.

If, however, you can find some inner reserves of strength and courage and you manage to make it all the way to the end, congratulations! You have a giant weird wall hanging! You can do anything! Now get into bed and have a good cry because you deserve it.

Eliza is an ex-New Yorker who is still a little bitter about it but appreciates the space Chicago offers for apartment woodworking. The only things she truly cares about are dogs, mid-century furniture, and television, but she is pretty good at acting like she cares about people and, like, other important things. She is also the only author of this blog so she finds it annoying that she is expected to fill out this "biographical info" section.

SO MANY RECTANGLES: the current state of the living room

some cool, old stuff I got

Welcome to BFPC! I'm Eliza and this is my anti-aspirational DIY blog, where I'll document my attempts to smother my chronic anxiety with neat crafts obsessive online rug shopping.